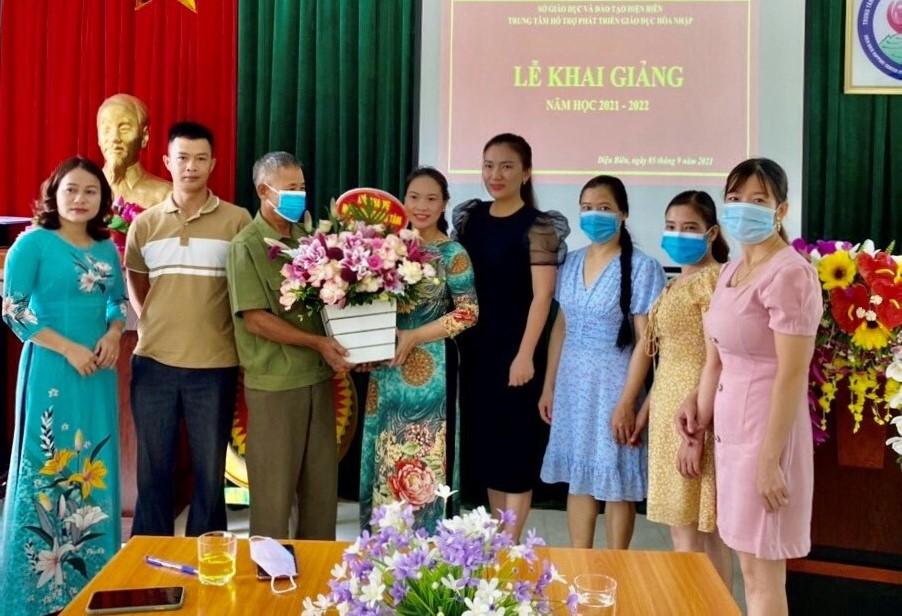 The Dien Bien Support Center for the Development of Inclusive Education (Support Center) held its official school opening ceremony on September 5th, 2021, with the enrollment of 50 new students.
Despite no case of COVID-19 infection was recorded in the province for the last 17 days, protective measures were still strictly adopted. The ceremony was held on a smaller scale with all participants wearing masks.

In the first half of August 2021, the Support Center conducted a series of screening and counselling session for over 90 children with disabilities and symptoms of developmental disorders. The children were residents of Dien Bien Phu city and five neighboring districts of Dien Bien province. The activity was organized under the support of the provincial Department of Education and Training (DoETs), in close coordination with local primary schools and kindergartens.
The screening and evaluation were conducted using the Denver Developmental Screening Test (DENVER) II and the Psychoeducation Profile – Revised (PEP-R), followed by basic counselling provided to parents on the education that best suits the needs of their children, aiming to help them achieve full potential.

Recently, the admission results were approved by the provincial DoETs, with 50 children with disabilities get admitted.
In the academic year 2020-2021, 50 students received education and intervention from the Support Center. Out of the 10 which have been transited to mainstream schools or relocated with their families while the other 40 continue their second year at the Support Center. Together with the 50 newly admitted children, in the school year 2021-2022, the total number of students of the Support Center therefore will be 90, including children with intellectual disabilities, speech impairment, hearing impairment, autism and DOWN syndrome.

In 2021, MCNV will continue the assist the Support Center and the province on inclusive education via providing capacity-building on early detection, early intervention and early education to local education managers and teachers, establishing collaboration mechanism for inclusive education support between the Support Center and satellite schools, providing information on early detection, early intervention and education for children with disabilities is transfered to all 10 districts/cities in Dien Bien./.

Your ticket for the: Dien Bien Support Center for the Development of Inclusive Education to welcome 50 new students