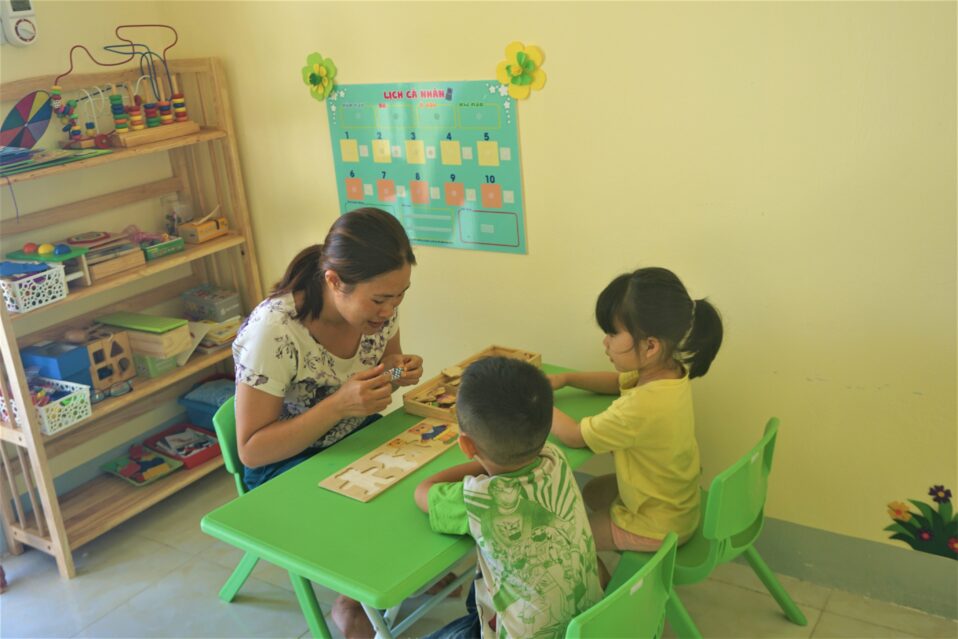 The opening ceremony of Dien Bien Support Center for the Development of Inclusive Education on September 11 has paved the way for a brighter future of children with disabilities in Dien Bien province. As part of the event, the Center also kick started the new academic year 2020-2021.

In 2016, a Memorandum of Understanding (MoU) was signed between the Medical Committee Netherlands-Vietnam (MCNV) and the Dien Bien provincial Department of Education and Training, declaring the willingness to establish and mobilize funding for the construction of Dien Bien Support Center for the Development of Inclusive Education (Support Center).

Thanks to great support from the Provincial People’s Committee and Department of Education and Training of Dien Bien Province, donors from the Netherlands, Kind Heart Foundation (Vingroup) and PwC, the Support Center was put into operation in October 2019 and welcomed its first batch of students in December of the same year.

An outdoor lesson in the Support Center. Photo: MCNV

Being established as core part of the project ‘Capacity building for Dien Bien Support Center for the Development of Inclusive Education’ by MCNV, the Center aims to provide expertise and support in early detection, early intervention and inclusive education for children with disabilities in Dien Bien; raising community awareness towards equal rights of children with disabilities; and assisting community and parents in supporting their disabled children’s social inclusion.

Covering an area of nearly 6000m2, the Support Center consists of 6 buildings, with a total number of 24 rooms, including classrooms, multisensory rooms, individual intervention rooms, etc, to accommodate different needs of students.

In order to facilitate the rehabilitation and improvement of students’ senses and skills, the Support Center is furnished with a variety of necessary aids and equipment, such as keyboard, manual alphabet, sensory pads, twisting puzzle, manipulative, etc.

According to Deputy Chairman of Dien Bien provincial People’s Committee, Mr. Le Van Quy, there are nearly 4,000 children of disabilities in Dien Bien. Many of them are still out of school and many others are struggling in adapting to general education environment.

“I hope the Support Center will step by step reinforce its teaching quality, and become the trusted second home of children with disabilities in Dien Bien”, he said.

Speaking at the ceremony, Deputy Director General of the Department of Primary Education, Ministry of Education and Training, Standing Deputy Head of the Steering Committee on Education for Children with disabilities, Dr.Ta Ngoc Tri, emphasized the importance of inclusive education, and highlighting the practical roles of the Support Center in the national education system.

“The Support Center not only works on early detection and intervention to help students with disabilities grow to full potential, but also plays a significant role in assisting other schools and education institutions in improving inclusive education,” he noted.

According to MCNV Country Director, Mr. Pham Dung, the establishment of the Support Center in Dien Bien province is realized based on the previous successful models supported by MCNV in three provinces of Dak Lak, Phu Yen and Cao Bang. MCNV therefore hopes that the Support Center will continuously improve itself to fulfill its mission and develop its capacity to serve as a technical supervisor of similar Centers in the Northwestern region in the future.

On this occasion, the Support Center also received gifts including water filter, winter blankets and warm clothes from various sponsors.

Your ticket for the: MCNV continues promoting inclusive education in Vietnam