In the week of 20th March 2017, the NWO-WOTRO funded project “Scaling-up nutrition-sensitive agriculture” was officially launched in Vientiane, Lao PDR. The launch was hosted by the National Institute of Public Health (NIOPH) and saw the involvement of a number of consortium partners and stakeholders from both countries. The main objectives of this event were to develop a shared understanding of the project, discuss expectations and make a joint plan of activities. 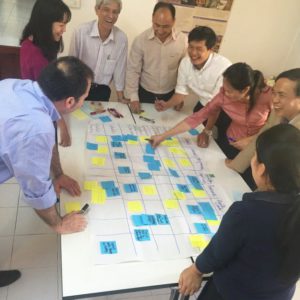 During the next four years, the team will conduct a transdisciplinary research aimed at generating evidence on the effectiveness of, and best way to scale-up, NSA amongst ethnic minorities in mountainous areas. The project will be implemented in Dong Xuan district, Phu Yen province in Vietnam and Nong district, Savannakhet province in Laos. The NSA project will build on past experiences of MCNV projects, and team up with the newly started CANTEEN and AFAS projects which are managed by MCNV. The research will be carried out in collaboration with partners from Lao PDR (NIOPH, NAFRI, NNC) and Vietnam (HUAF, ICHR, NIAPP) under the scientific supervision of the Athena Institute of the Vrije University Amsterdam and with cross-country facilitation by MCNV.

Your ticket for the: Scaling-up Nutrition-Sensitive Agriculture (NSA) in Lao PDR and Vietnam