The seed of prosperity 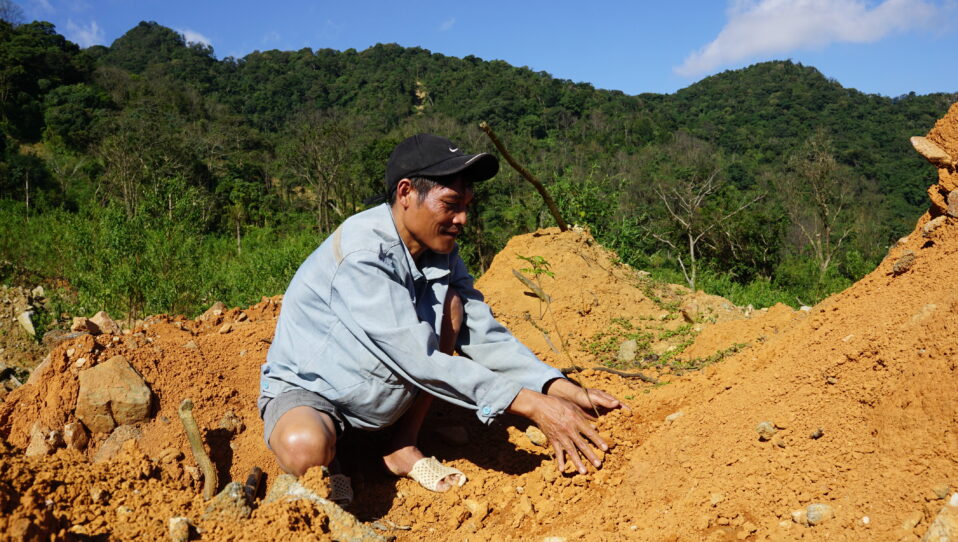 It’s the beginning of dry season in the North of Huong Hoa district (Quang Tri province). Ho Van Dinh is walking along the stream, heading toward the Ta Bang mountain, under the blazing sun.

Dinh’s family used to live at the foot of Ta Bang mountain, in Nguon Rao Pin village. However, after the historic flood swept through Quang Tri in October 2020, several massive cracks have appeared in this mountain. To protect people from the hazards of landslide, local authorities have swiftly relocated 32 households living nearby, including Dinh’s, to a safer place.

After climbing up a nearly-2-km bumpy slope, Dinh stopped walking. Pointing toward a land plot filled with stones and rocks, he said: “I planted trees there. The total area is 1.6 hectares”.

At the first glance, it seems like nothing can survive on this barren land, except grasses and shrubs. Nonetheless, thanks to the hardwork of Dinh’s family, nowadays, many young tung trees (Vernicia Montana) have started to showcase their vital Eden-green color together with “lat hoa” (Chukrasia tabularis).

“These trees were planted by me, my wife, my three sons and their wives. It took us around 3, 4 days in a row to complete the work. After three months, the survival rate is nearly 100%,” Dinh said happily, while busily filling soil around the root of a young tree.

Dinh’s household is one of 100 households in four villages of Huong Son and Huong Phung commune supported by the project “Promoting sustainable partnership between CSOs and enterprises for sustainable forest management in the context of climate change” (PROSPER project) co-funded by the European Union (EU) and MCNV.

In the year 2021, PROSPER project has partly funded the labour cost for these 100 households to plant tung trees together with other indigenous plants covering a total area of 139.4 hectare. The plantation density is 1,333 trees per hectare, including 1,067 tungs trees and 266 indigenous plants.

In the same year, MCNV has piloted planting tung trees to prevent landslide in several locations in Huong Son, Huong Lap and Huong Viet communes, with a total area of 42 hectares. Earlier, in 2020, two villages in Huong Phung commune receive funding for forest plantation in an area of 120 hectares. So far, the total area of forest plantation in Northern Huong Hoa supported by the PROSPER project has been 300 hectares.

“Planting Tung trees help protect the soil and water. It is easy for Tung trees to grow here, thanks to the suitability with local soils and climates,” said Dinh.

“It also benefits us in terms of income generation. When it comes to the harvesting season, all of us go to collect the seeds. The sale of the seeds helps us earn additional income to afford food for the family,” he shared.

Dinh’s family has been growing tung trees in over 10 years, covering an area of 1,2 hectares. According to Dinh, fresh tung seeds is sold at VND 5,000-6,000 per kilogram, while the price of dried tung seeds is doubled.

Normally, a tung tree starts to mature to bear fruits in their third year and yield commercial quantities at three to four years of age. The oil obtained from Tung seeds is commercially valuable, and is popularly used as the ingredients for the production of wood finishing products, paints and ink.

According to a research by MCNV in 2020, tung tree plantation in Northern Huong Hoa covers a total area of 2,400 hectares (in combination with other indigenous trees), and 300 hectares of Tung trees dispersedly planted in household surroundings, yielding an annual amount of dried seeds of up to 1,500 tonnes, equivalent to VND 15 billion per year.

It is estimated that each hectare of tung trees can produce 3-4 tonnes of dried seeds, worth VND 30-40 million/year, if they are properly taken care of.

Recently, Quang Tri province has included tung tree in the list of key species contributing to the province’s implementation plan of the project “Planting one billion trees in the period of 2021 – 2025” launched by the Government of Vietnam./.

Your ticket for the: The seed of prosperity

The seed of prosperity