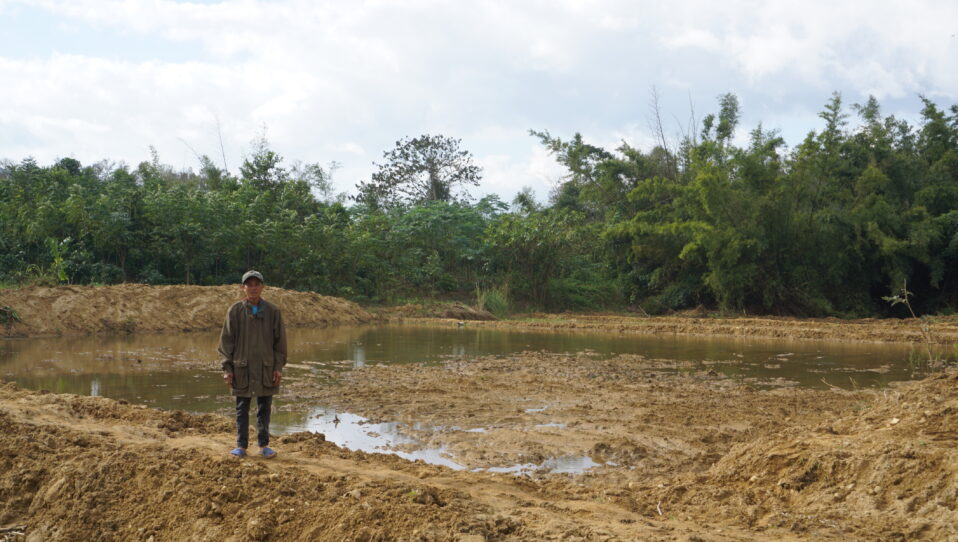 Ho Van Cat on his piece of land which is now ready for cultivation.

The historic floods and landslides have massively devastated numerous areas in Quang Tri province, in particular Huong Hoa district. Amidst the loss of livelihood, thousands of people are looking for the light of hope…

“For the last three days, I have been so excited that I cannot sleep!” Ho Van Cat says while rubbing his two hands against each other.

Standing on his 0.35 hectare piece of land, which just has been leveled and divided into five parts, Cat’s face glows with blissfulness. Under the sun, his eyes glistens like a child who has got the gift of his dream from Santa Claus.

Seeing his smile today, it is hard to imagine how frustrated Cat was two weeks back.

“If no one reached out a hand to us, we would not survive!”, he sadly said.

Located by a stream, the paddy field, the only livelihood of Cat’s family was deeply buried under huge layers of soil and rocks carried down by landslides.

The only crop of the family normally starts in December, and they would not be to access to farming land without the support of bulldozer. Nothing to be sowed, nothing to be reaped. The future of the family of eight, including five children, would be haunted by hunger.

Luckily, Cat’s family were not alone as they are one of the first four poor households in the hamlet receiving the support from MCNV and local authorities.

With the financial support of EUR 10,000 from Dutch donors via MCNV, tonnes of earth and rocks have been removed, making 03 hectare of agricultural land accessible to the affected owners.

The post disaster relief work will take time and MCNV is trying our best to make sure that those flood victims are not alone in their new struggle.

Your ticket for the: Light of hope admist losses