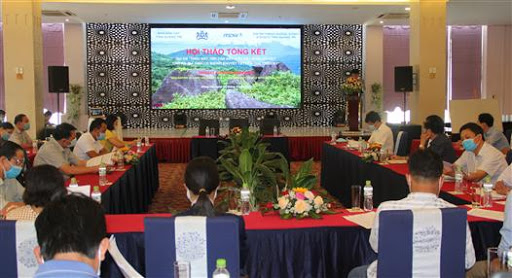 Participants at the workshop

After nearly two years of implementation, the project “Realization of land use rights for ethnic minority people with disabilities in Dakrong and Huong Hoa districts” funded by the Embassy of the Kingdom of the Netherlands has helped underprivileged people make a step closer to self-reliance and social inclusion.

With a total value of EUR 100,000, the project was jointly implemented by the Medical Committee Netherlands-Vietnam (MCNV), Quang Tri provincial Committee of Ethnic Minority Affairs (CEMA) and the province’s Association of Persons with Disabilities (PwDs) and Agent Orange Victims, Sponsorship for PWDs and Child Right Protection (DPO).

The project was concluded with a closing workshop held on May 4 th, 2021, in Dong Ha city, Quang Tri province, providing the stakeholders with insights of the project outcomes, challenges during the implementation process and post-project action plan.

The workshop brought together delegates of Quang Tri CEMA, Quang Tri DPO, Quang Tri Department of Natural Resources and Environment and representatives of 13 commune beneficiaries of 2 districts Dakrong and Huong Hoa.
Conducted in the format of a hybrid meeting, the workshop welcomed the virtual participation of Mr. Peeters Robbie, the Second Secretary of the Embassy of the Kingdom of the Netherlands in Vietnam and Mr.Pham Dung, Country Director of MCNV Vietnam.

In nearly two years of implementation, the project has supported the leveling of residential land, agricultural production land and granting land use right certificates to ethnic minority households with PWDs in Dakrong and Huong Hoa district, facilitating independent livings and social inclusion.

Despite the setbacks of Covid-19 and the historic floods sweeping through Quang Tri in October-November 2020, the project has achieved significant results, with 112 ethnic minority households with PWDs received support to level residential land (13,558 m2) and agricultural land (84,080 m2). Meanwhile, 18 households was supported in the granting of land use rights certificates.
These supports have vastly contributed to PwD’s property ownership verification and lay a better foundation for their agricultural production.

As part of the project, a database consisting the information on the status of residential and agricultural production land of over 22,000 PwDs households was created, aiming to assist Quang Tri province in approaching the government’s related policies. The model is the first one of its kind that has ever been applied in Vietnam.
Moreover, the project provided PwDs with better access to policies on land use rights and related policies, services and procedures via training workshop, communication on awareness raising and capacity building for Quang Tri DPO.

Via these activities, the project contributed to accelerate the realization of the Resolution No. 10/2018/NQ-HĐND themed “Policy on supporting residential land and funding for granting certificates of land use rights, production land for poor ethnic minority households and poor households in the communes of region III and extremely difficult villages in the period 2019-2022”.
Despite the project has been concluded, the models piloted in the project are expected to contribute to realizing the National Target Program 2021-2030 on socio-economic development of ethnic minorities-inhabited areas, including two projects on land and resilient settlement.

Talking about the outcomes of the project, Mr. Peeters Robbie, the Second Secretary of the Embassy of the Kingdom of the Netherlands in Vietnam, stated: “What has been achieved is something we can all be proud of”, considering the hurdles of Covid-19 and the floods hitting the region in October and November 2020. On the occasion, he highlighted the spirit of equality and equity in the longstanding cooperation between the Netherlands and Quang Tri province which is “still very much alive today.”

“For this project, we figuratively and quite literally are leveling the playing field”, he said, emphasizing the belief that everyone should have a fair opportunity to develop a living for themselves.

To conclude his speech, Mr. Robbie commended all the project partners on their hard work and results obtained and expressed his wish for field visit in the near future.

Speaking at the workshop, Head of Quang Tri province’s CEMA, Mr.Le Van Quyen highly appreciated the results of the project:

“The project has practically helped meet the need for residential and production land of PwDs, via the close cooperation between authorities of various sectors, including ethnic minorities affairs, natural resources and environment, land registration and non governmental organization,” he said.

The Head of Quang Tri CEMA also suggested a longer period of implementation of project related to land use rights, in order to create more profound impacts.

In the workshop, delegates also gave recommendations on how to improve access to land use rights for PwDs, suggesting Quang Tri DOP to take proactive step in mobilizing and diversifying sponsorships, including those from enterprises and the enhancement of communication and awareness raising activities on land use rights policy./.

Your ticket for the: Project on Realization of land use rights for ethnic minority people with disabilities concluded with encouraging results