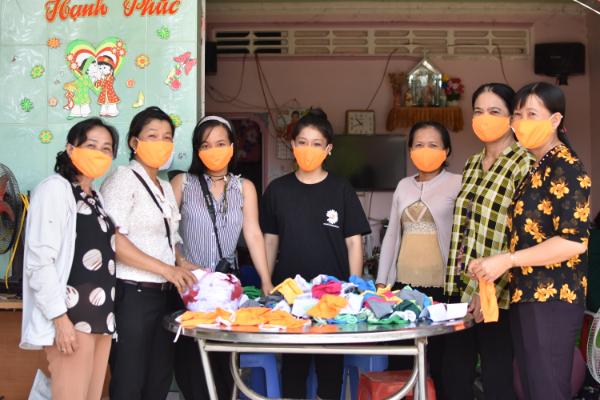 “Life is not about waiting for the storm to pass, it’s about learning to dance in the rain”, this saying can apply to many incidents in our life, including the fight against COVID-19.

This is a garment manufacturing group of Tan Thieng commune, Cho Lach district, the Mekong delta province of Ben Tre. The group is one of the 19 cooperative groups financially supported by Jumpstart Foundation (the Netherlands), as part of the Women Empowerment programme (WE), implemented by MCNV.

Founded in January 2019, the group has created job for 20 members, generating monthly income of around VND 3-4 million for each. The main products of the group are female clothings and beddings. Workers can choose to work full-time or part-time, work at the group’s facility or work from home.

Besides its flexibility, garment manufacturing is considered a safe choice of occupation (not depends on the nature) in the context of climate change and salt intrusion, which are getting more severe in Ben Tre.

In the first half of 2020, due to COVID-19, the group’s production was suspended for over 2 months. Nonetheless, instead of wasting time on feeling sorry for themselves, they took this chance to contribute to the community by making face masks. The fabric were provided by the commune authorities while the leader of the group, Ms.Nguyen Thi Ngoc Yen, used her pocket money to sponsor wage for the workers.

In March and April, 10,000 masks were produced and distributed as the gift of care to residents in the commune, the district, of which 5,000 were donated to local schools.

To acknowledge their dedication to the fight against COVID-19, Ben Tre provincial Women’s Union recently awarded Tan Thieng garment manufacturing group with the Certification of Recognition.

COVID-19 is now contained in Vietnam, and the group production has been restored since June. They are putting even more efforts in their works, which beautifies others  and brighten their future, at the same time.

Your ticket for the: When WE dance in the rain