Royal Embassy of the Netherlands 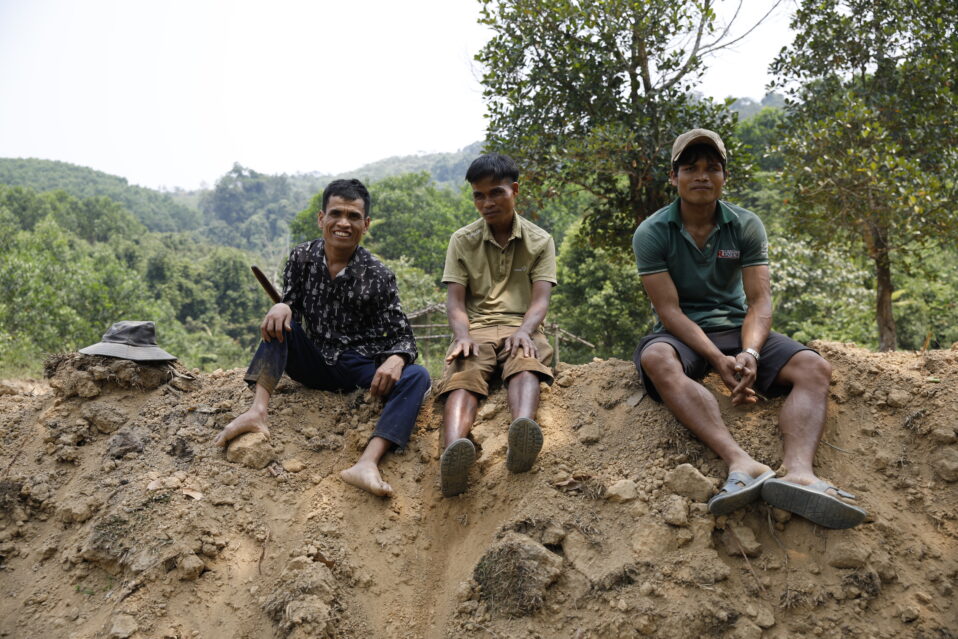 Slowly walking pass a large area of land that was just leveled in the mountainous village of Cup, Huc Nghi commune, Dakrong district, three Van Kieu ethnicity fellows excitedly share with one another about their plan in the near future.

“My land plot is quite large. I will use part of it for wetland rice cultivation, and use the rest for a chicken farm”, says Ho Van Che (41-year-old), with one hand on his crutch and the other pointing to his two plots of land which were just leveled.

“For myself, I am not married yet, and have to rely on my parents for living. I am going to roll up my sleeves to join my parents on the paddy field soon. Hopefully, I will be able to help produce more staple food for the family. It will also be a good way to reduce the helpless feeling!” Ho Van Ngoi, 36 years old, struggles to lift up his face while talking about his future plan.

Ngoi was born with a hunched-over upper body, making it difficult to cast his eyes to the front. Even though it is hard to see Ngoi’s whole face, we still can catch a glimpse of his smile.

Ho Van Nghien, 26 years old, softly predicts: “The rainy season is coming. The rainfall will nourish the soil and stabilize it. The end of the year will be the ideal time for  sowing, and next year April it will be our first wetland rice harvest season”.

Nghien has got married and is now father of three sons. Like many households in Cup village, in order to earn enough for the family’s living, he and his wife spend most of their time working far from home on upland fields.

When the rainy season comes in early June, the couple start seeding. Robust seeds will be broadcast onto the mountainous soil, where they wait to sprout. In the next 3 or 4 months, the rice will be ready for harvest.

However, upland crop has only one season a year, yielding around five packets of rice (150 kg), only enough for the family to survive in three months.

While his wife spends time taking care of their children at home, Nghien has to take on extra works to afford the staple food for the rest of the year. One of the tasks Nghien is hired to work on is to harvest Acacia wood. He may get VND 150,000/working day. However, like many seasonal works, it cannot be a stable source of income.

“I am exhausted with upland rice cultivation, since I have to work far from home, and climb up the high hills.”

After a while of silence, Nghien confides: “It is tiring enough for a normal person, for people with disabilities like us, it is even tougher. From my house, I have to walk four kilometers on bumpy path to reach my rice field. It takes me over one hour to walk. I am visually impaired, so I still can walk like that. My two handicapped friends, Che and Ngoi, cannot do so”.

All of the three men, Che, Nghien and Ngoi have production land located nearby their houses. Their plots of land were provided by the commune authority. However, due to the infertility of the soil and rough topography, they could not work on their land.

The light of hope only arrives when they receive the support to level the land. They are now looking forward to harvest seasons on their ‘old yet new’ pieces of land.

Supporting ground leveling for agricultural and residential land and land use rights certification are the key activities of the project “Promoting access to residential and agricultural lands for households of ethnic minority people with disabilities” jointly implemented by MCNV, the Committee for Ethnic Minority Affairs  of Quang Tri province, and the Association of People with Disabilities (PWDs) and Agent Orange/Dioxin victims, Sponsorship for PWDs and Child Rights Protection of Quang Tri province (Quang Tri DPO) in the mountainous districts of Dakrong and Huong Hoa.

The project is funded by the Royal Embassy of the Netherlands in Vietnam from July 2019 to December 2020. It is estimated that 100 households of PWDs like Che, Ngoi and Nghien will be supported in land leveling. At the same time, hundreds of households with PWDs will be benefited from better access to information, policy and services related to land use rights.

Quang Tri DPO will receive training to improve their capacity in assisting members to get access to the State’s policy for the disabled.

Yesterday, Che, Ngoi and Nghien were worried about their family’s future and the shortage of food. Today, they are looking forward to the day marking the first harvest season on their own land. That day is coming soon!

Your ticket for the: Highland: Harvest seasons await!