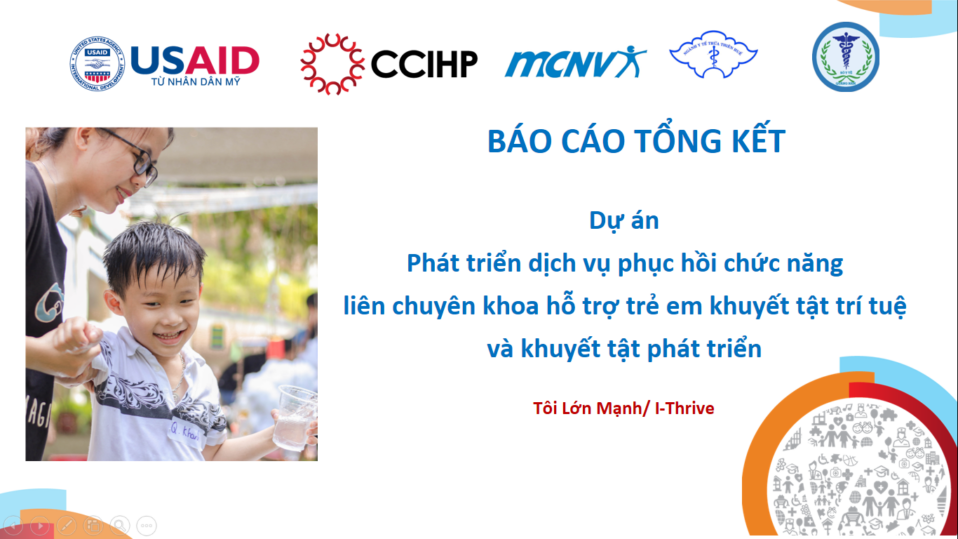 The Center for Creative Initiatives in Health and Population (CCIHP), the Deparments of Health in Thua Thien – Hue and Quang Nam province recently held the close-out ceremony for the project ‘Interdisciplinary Rehabilitation Services Supporting Children with Intellectual and Developmental disabilities to thrive’ (I-Thrive).

The project I-Thrive is funded by the United States Agency for International Development, CCIHP being the implementing partner, and MCNV being the co-implementing partner.
The close-out event, held on February 2&3 brought together representatives of USAID, CCIHP, MCNV, the Medical Services Administration (Ministry of Health), Thua Thien – Hue and Quang Nam Deparment of Health, Da Nang University of Medical Technology and Pharmacy, Hue University of Medicine and Pharmacy, and partner hospitals, medical centers in Thua Thien – Hue and Quang Nam.

The capacity-building activities were conducted through a series of 12-month full-time training program in Occupational Therapy (OT), Speech and Language Therapy (SALT) and Physical Therapy (PT). These are also Vietnam’s first 12-month program in rehabilitation training.

Upon completion of the program, 56 trainees, who are healthworkers of province and district-level health facilities have returned to their workplace and applied what they have learnt to provide rehab services to 4.086 patients, of which PT, OT and SATL accounts for 89%, 41% and 6%, respectively.
Along with coaching, I-Thrive has created and implemented intervention program with the multi-disciplinary group in rehabilitation in province-level health facilities, participated by parents of children with intellectual and developmental disabilities.

In addition, the project also achieved a significant milestone, which is the completion of the “National guideline on early identification and intervention for children with autism spectrum disorder” and the “Guideline on mechanism of interdisciplinary rehabilitation team”.
These aforementioned outcomes are expected to lay a solid foundation for future projects in rehabilitation and provide the best support for personnes with disabilities./.

Your ticket for the: I-THRIVE project closed with significant outcomes