Located in the remote mountainous area of Phu Yen province, 100% of Phu Mo commune’s residents are of Cham H’roi ethnic group. 25% of the children in the community are malnourished. Being aware of this situation, MCNV has cooperated with local partners in Phu Yen to bring about better meals and better lives to the children.

On contrary to the name which means “rich and fertile”, Phu Mo is known as the highest, remotest and poorest commune in the southern central province of Phu Yen.

With a population of more than 3,000, 70% of the local residents are impoverished or living on the threshold of poverty.

Local people earn their living on shifting cultivation, earning for their livings mostly by planting cassava. Due to the instable price, this crop only can help them generate a limited and instable income. Rice, cassava leaves, wild vegetables and chili mixed with salt are what usually seen in their daily meal.

According to a survey conducted by MCNV and Hue University of Medicine and Pharmacy in March 2018, 76.7% of the households in Phu Mo and Xuan Quang 1 communes (Dong Xuan district) did not have sufficient food to eat each year. Besides low income, people in these localities face with another challenge in access to food, which is the shortage of supply, since most nearby groceries only sell dried food like instant noodles, porridge and snack for kids. Meanwhile, in kindergartens, neither lunch nor breakfast is provided due to the lack of funding.

In Phu Mo commune, out of 100 kids, 25 suffer from malnourishment, in the form of stunting or underweight. In some villages, this rate even exceeds 50%.

Mang Thi Su, 25 years old, is a mother of two children: one boy (6 years old) and one girl (3 years old). Both of them were pale and weak, due to malnutrition. Feeding the kids was a tough job for the young mommy, since regardless of how hard she tried, her children kept refusing to eat. 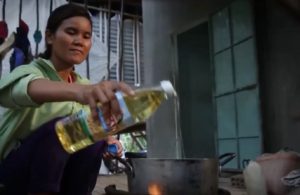 Mang Thi Su prepares a meal for her children

According to MCNV, the high rate of malnutrition in Phu Yen is caused by several factors. Apart from economic constraint and scarcity of quality food supply, parents’ lack of understanding and knowledges in childcare and nutrition is a critical factor which must be tackled.

In June 2018, the concerns of Su and other women in Phu Mo commune began to be relieved thanks to the project “Scaling up of malnutrition fighting initiatives based on agricultural solutions in the mountainous areas of Vietnam and Laos ”(referred to as Nutrition Sensitive Agriculture – NSA), implemented by MCNV.

Thanks to the project, for the first time, Su gained basic knowledge in nutrition, learn how to prepare suitable meals for her children with tasty, nutritious yet still affordable dishes.

The instruction of nutritionists and healthcare advisors has enabled Su to diversify the ingredients for the daily meals, and turn them into child-friendly dishes (pleasant to taste and easy to digest). The dishes Su cooks now looks more catchy, as they are added the colors of a variety of healthy ingredients. Some of them are very easy to find in her home garden, such as tomatoes, carrots, eggs, etc.

Nowadays, in Su’s family’s every meal, the pleasure has replaced the worry, and the excitement has filled the eyes of the children. Her home is now full of smile and laugher, instead of the sound of scolding and crying. “He (Su’s son) loves colorful dishes very much. He can eat one bowl or even one and a half bowl of rice with food. I am overwhelmed with joy, especially when he finishes eating, sits on a scale and asks me “Mom, how much do I weigh now?” In the young mom’s eyes, happiness sparkles.

The change in one individual step by step leads to the change of a group and later on spread to several groups. Every month or every week, members of each group gather for a meeting, at which they share about the health and nutrition situation of their children. They often exchange opinions and learn from healthy child-rearing examples and update cases that need to be monitored, practicing how to prepare nutritious and affordable dishes.

Improving the community’s awareness about nutrition in childcare is one of the many activities conducted in the NSA project. A holistic approach has been implemented with the close coordination of four sectors: health, agriculture, education and private businesses.

Under the coordination of local health staff, district, commune and village workshops and trainings were implemented. Health workers, leaders of mother groups and pre-school teachers are trained in nutrition and environmental sanitation. Children get regular health checkups, and severely malnourished children receive treatment.

In addition, households are trained to increase production, improve nutrition from their own gardens, fields and yard, for example raising chicken to lay eggs, or intercropping with vegetables and fruits.

To increase the quality of children’s meals, the NSA project also gives funding to preschools to provide in-school lunches and breakfasts, as well as orienting the private sector (food and grocery stores) to sell nutritious products such as porridge, cakes, and cereal flour, and facilitating the household to access nutritional products.

The NSA project is implemented by MCNV in Dong Xuan district in the period of 2017-2020, in cooperation with different partners, including WOTRO, the Vrije University Amsterdam (Netherlands), Hue University of Agriculture and Forestry, and Hue University of Medicine and Pharmacy.

Not only does it solve the problem of malnutrition among Vietnamese children, the NSA project also supports Lao children in 10 villages of Nong district, Savannakhet province. Currently, the Lao side has completed the initial survey, knowledge sharing and quantitative research survey toolkit, trained on research methods, data analysis, development of intervention plans and organized some initial intervention activities.

MCNV’s nutrition project is an effort towards the UN’s Sustainable Development Goal No. 2 on hunger eradication, food security, nutritional improvement and agricultural development.

Your ticket for the: Improving nutrition for hundreds of Cham H’roi children